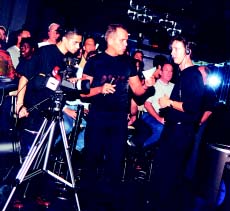 Larry Wald describes himself as a man “easily bored and frustrated,” the kind of guy who craves the excitement of a big idea. So when local entrepreneur Chris Hooper pitched Wald on the prospect of launching a gay dating game live on the Internet, he didn’t need time to think about it.

“Larry jumped all over it. He thought it was great,” Hooper says. “It’s true. It was born over a bottle of champagne at Mark’s [on Las Olas],” Wald says.

The result is DatingGayme.com, a groundbreaking live Internet broadcast at 9 p.m. every Wednesday from the Cathode Ray club in Fort Lauderdale. Wald, co-owner of Cathode Ray with Richard Faseymeyer, is the show’s host, a job he performs with appropriate irreverence.

No need to worry about that on the Internet. When a Web surfer visits the site, an age check confirms that the visitor is at least 18. After that, tune in and sit back for an anything-goes show, sent on a 12-second delay all over the world.

“It goes right out just like it happens,” says Hooper, whose production company specializes in visual content for the Web. “We like to live on the edge.”

The basics are simple. Each 30-minute show is divided into two 15-minute segments. In each, the contestant questions three bachelors — called “tricks” — before deciding which one he’d like to date. The couple receives a date package — dinner, movies, theater tickets — just like on TV.

But there are differences: 1) All of the contestants are gay and, 2) the questions demand a certain willingness to discuss extremely personal issues — in full view of people watching at the bar, and on the Internet all over the world.

Having attended a live broadcast, I’m willing to wager it is right up there in terms of outrageous entertainment on a Wednesday night. My proof rests in the fact that this newspaper would be reluctant to publish some of the questions and almost all of the answers. Most of the questions are by Wald, who has found an outlet for the humor he once tried as a stand-up comic.

Here are a few examples (you can get all the answers on the Web site, www.DatingGayme.com):

What size bed do you prefer and why?

My mother doesn’t know I’m gay. Trick No. 3, pretend Trick No. 2 is my mother and tell her.

I’m having a party Saturday night, come as you are. How would you come?

We’ve all heard a dog’s bark is worse than his bite. If you were a dog, what would be better than your bark?

Wald is one of the highlights. A quick-witted, natural performer, he isn’t shy about poking fun at the contestants or the gay community. As one contestant said he wanted to find someone who understood the importance of monogamy, Wald turned to the predominantly gay crowd and said, “Hear that word everyone — monogamy?”

“It’s got to be cutting-edge,” Wald says. “We have to make it so people say, ‘Instead of watching West Wing, let’s watch DatingGayme.com.'”

The show is having no trouble attracting contestants. “Everyone who has been on the show wants to come back,” he says. While so far the show has featured younger men, Wald plans to include lesbians and older bachelors.

“I think the potential for this is beyond anything we can imagine,” he says. “In a few years, a lot of shows will be on the Internet.”

But while DatingGayme.com is frivolous escapism, it also is the first show of its kind and a big deal for South Florida’s well-established gay community.

“I’ve been in the gay community 15 years and I’ve never seen anything like this,” said spectator Mark Beckwith. “It’s unbelievable. Everyone is talking about it.”

Pretty soon they’ll be talking about Mark. He’s the bachelor in two weeks.